While the Westinghouse WH2000iXLT didn't place in our inverter generator comparison, it's a popular model so we thought we would give it a closer look.

It offers clean, reliable power, produces very little noise, and is very reasonably priced compared to other portable generators in this power category.  Like other units in this category the iGen2500 offers 1800 watts of continuous power and can handle influxes up to 2200 watts.

That said, for just a bit more money you can get the iGen2500 from Westinghouse that offers 400 more watts running power and has a more durable engine casing.

We're not huge fans of the bright blue cowling that comes on this unit.  It gives it the appearance of a toy rather than a solid piece of equipment.

It's made of high impact plastic, but it looks cheap and is susceptible to scratching, It's also so hard that our money's on any solid hit causing some cracking.   We prefer the softer plastic used on other models such as the Champion or Honda EU2000i.  It's not as flashy, but this is a generator, not a race car.

Westinghouse put some serious effort into making sure this unit was quiet, and it is.

There are a few nice features to reduce the likelihood of your camping neighbors complaining about the noise.  In addition to double insulation, the cowling is vibration mounted, utilizes an asymmetrical cooling fan system, AND the engine incorporates a dual muffler design.

The pull cord has a similar cheap feel to it.  Wouldn't be terribly surprised if it didn't last all that long either.  Again we are much more confident in the longevity of the Champion and Honda components.

The fuel opening is at the top of the unit and has a couple nice features.  There's a reservoir for any fuel that doesn't make it into the tank and even a spout allowing you to pour off any of that spilled fuel.  These reservoirs aren't uncommon, but the spout is a nice touch. The run time on a single tank of fuel is very impressive.  Some of the other models we've covered had enough capacity to get your through the night in an RV, but the Westinghouse goes well beyond that, especially at lighter loads.

The official numbers are 17 hours at a 25% load and 13 hours at a 50% load. Unless you keep you camper as cold as an ice box, it should be enough to keep your AC running all night and then some.

The gas tank capacity is 1.3 gallons.  That's slightly larger than some of the other portable inverter generators we've covered.

The WH2000iXLT is very user friendly. All the switches needed to start the unit are color coded yellow.

Before starting the unit make sure that it has adequate fuel and oil. Next turn the fuel tank vent, engine/fuel control, and choke switches to the “ON” position. Then grab the recoil handle and pull lightly until you feel some resistance. Then pull more quickly, much like starting a lawn mower.

Once the engine starts up move the choke switch to “OFF”.

Powering down is simple as well.  First unplug any devices connected to the unit. This allows the unit to run at “no load” to stabilize the engine. Then move the engine control switch and fuel tank vent to the “OFF” position. 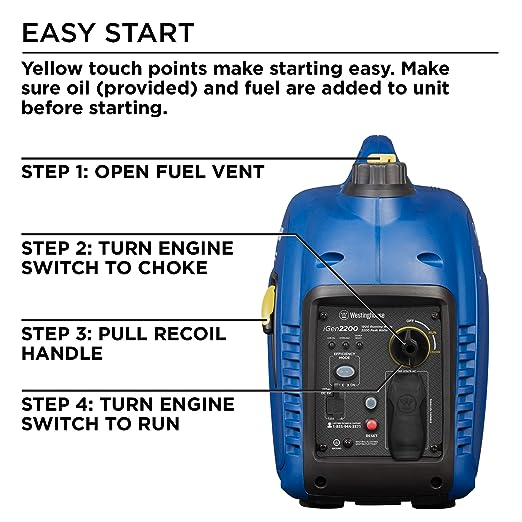 Like many other generators in it’s class the WH2000iXLT can be paralleled with another identical unit to effectively double it’s power output. You will need to purchase a separate cord to allow for parallel operation.

Before you can utilize the parallel capabilities, you will first need to purchase the Westinghouse paralleling cord.

Make sure both switches (located on the cord itself) are set to the "OFF" position. Then connect one male plug to the first generator and connect the remaining plug into the other. Either of the two receptacles can be used.

You'll know it's working when the light on the plug illuminates.  And just like that you have double the power!​

Servicing the WH2000iXLT is relatively easy.  All the service compartments are located on the opposite side from the control panel.

At the top you'll find the spark plug which is easy to access and replace when needed.  The oil fill/drain is in a panel at the bottom and is accessed by removing a single screw.

There's a fuel tank drain access on the side as well.  It's important to drain the unit whenever you won't be using it for extended periods of time.

The air filter is located in a panel on the back of the unit and should be cleaned every 50 hours of use or so.  It can be cleaned using household detergent soap and warm water.  Once soaked simply squeeze the foam filter until the water coming out of it looks relatively clean. 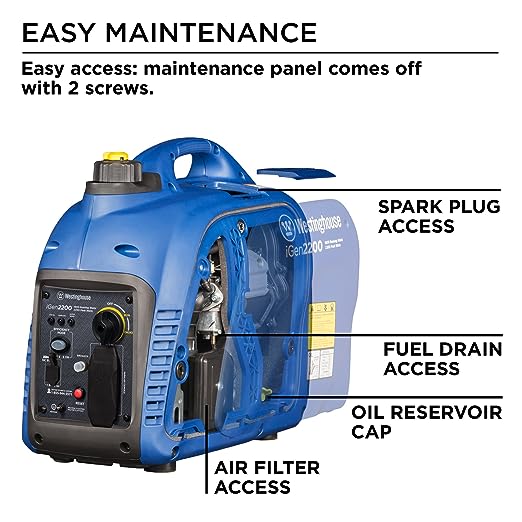 With it's high power output and low noise production the Westinghouse looks to be a solid generator.  The fact that it can run 17 hours on a tank of gas at 25% load definitely a plus.  It's lightweight, very portable, and comes in at a very reasonable price.

Our primary concern would be with the durability of the WH2000iXLT.  The components don't appear to be of the same quality as those found in the H﻿﻿onda﻿﻿ and Champion models.  And when it comes down to it, you want your backup or camping generator to work when you need it.

So when it comes down to it, we'd go with the Honda instead.